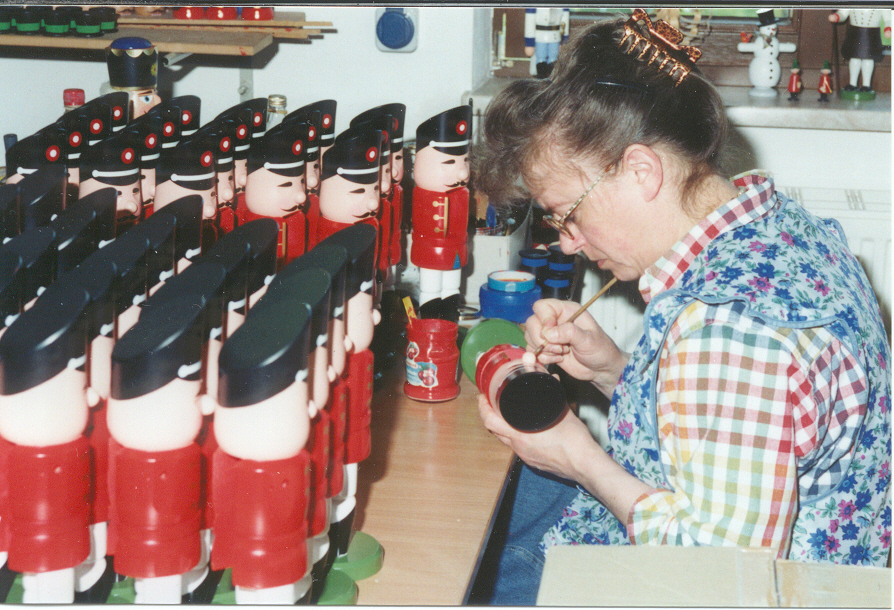 Do you know where Santa’s workshop is? Since we were tiny tots we were told that it’s up at the frozen North Pole. No, as I discovered earlier this year, everyone was wrong. Its’ location is quite a bit further south in eastern Germany, very close to the Czech Republic. Seiffen, a village of around 3000 people is situated in a remote, sparsely settled area, in the heart of the melancholy forests of Erzgebirge (literally translated “ore mountains”). It is here where lights glow in the windows of the traditional half-timbered houses where modern day Santa’s elves work at creating their wooden masterpieces.

A nutcracker soldier, the size of a fairy tale giant stands guard at one of the entrances to the town. Metal lanterns with Christmas designs light up the streets and alleys. Everywhere you look there are larger than life displays of wooden nativity scenes, Christmas pyramids, nutcrackers, and shaved pinecones and stars, a trademark of Seiffen’s artisans.

A motorized street train passes by transporting tourists and shoppers along the narrow winding streets, past the wood working operations and shops. In the shop windows there are a myriad of Christmas ornaments from angels with musical instruments, sleds with Santa, bell and star ornaments and of course the quintessential nutcrackers of varying sizes.

Most of the residents play some part in the making of wooden toys and Christmas ornaments. There is over 100 wood working operations; most of them small family run businesses. Oft times the tradition has been handed down from generation to generation and even the youth have embraced this institution and lifestyle.

Woodworking fits well with the Erzgebirge’s enchanting dark and moody forested ambiance. Four centuries ago, however, the locals were miners. During the Middle Ages the Knights of Riesenburg moved into the area to exploit the mountains’ veins of silver. In 1200, they built a castle in the nearby town of Sayda, and forty years later they constructed another in Purchenstein. Silver mining eventually gave way to tin mining. Seiffen is derived from “seifen” which describes the process of washing soil from the tin ore. When the tin began to run out, the miners had to find another way to earn a living so they turned to woodworking.

They first made practical objects like plates and utensils. Over time they developed a talent for making wooden toys and their creations became world-renowned. When the Nazis were in power, some of the workshops switched from making toys to fabricating weapons parts. After World War II East Germany came under Communist rule. Even though it was an atheistic regime, the Communist government promoted the making of Christmas toys and ornaments because they were hungry for U.S. dollars and West German Marks. When the Communist era ended in 1989 many factories and farms in Erzgebirge were brought to ruin.

Since the reunification of Germany in 1990, Seiffen’s citizens have traveled a rocky road to face one of their biggest challenges ever: changing to a capitalist system after forty years of Communism. The good news was that families, whose businesses had been expropriated by the Communists, had the opportunity to reacquire them from a federal agency that was in charge of privatizing property.

The transition hasn’t been easy, and many of Seiffen’s toymakers have had to make expensive renovations and improvements to their workshops. They were also faced with marketing their products, not just locally, but world wide, through international fairs, and using new tools like the Internet.

Today, more than 40 stores have cropped up in the village, most of them specializing in the wooden creations made by the local craftspeople. Tourist accommodations and restaurants are now in abundance to serve the tourists that flock to Seiffen, which help keep the woodworking traditions alive. Many visitors are from foreign countries like Holland, Austria, Japan, USA and France.

And what are some of Seiffen’s wooden specialties? Well besides the ubiquitous hand painted nutcrackers that come in all sizes, there are crèche figures, wooden barnyard animals, miniature villages, shaved star ornaments, wooden ring ornaments and angels playing musical instruments. There are a myriad of sizes of multitiered carousels or pyramids with nativity figures on each tiers, a wooden arch called a schwibbogen rises over the Christmasy figures, all topped with a wooden fan. Burning candles cause the fan to turn through convection, causing the tiers to rotate. The neat thing is that you can regulate the speed of the tier rotations by adjusting the fan blades!

Smoking men, another specialty here, are wooden figures made in the shape of government bureaucrats, fishermen, hunters, foresters, sausage sellers, bartenders, etc. By inserting a cone of lit incense inside his belly, a curl of smoke will come out of his O-shaped mouth.

One truly unique toy construction technique I observed here, while taking a tour of one of the workshops, is called “reifentiere” or literally translated tire animals. The artisan begins with a piece of softwood that is turned on a wood lathe into a ring. The skilled woodworker shapes the grooves and curves in varying degrees and angles, carving both top and bottom of the ring. When the craftsman removes the ring from the lathe, he cuts a small section out of the ring, like someone slicing a sliver from a cake. Voila, the result is a perfect profile of a cow, a sheep or a pig! The next worker will finish it off by rounding off the edges, detailing it and finally varnishing or painting the figure, simply amazing!

Christmas is perpetual in Seiffen, regardless of the season. This tiny village with an impressive history has successfully survived a roller coaster economy, as well as numerous political crises, which is a testament to the indomitable spirit of its people. If Christmas is the season of hope, then the people of Seiffen have been shining examples. Did I find Santa’s workshop in this small Erzgebirge town? …a resounding yes! 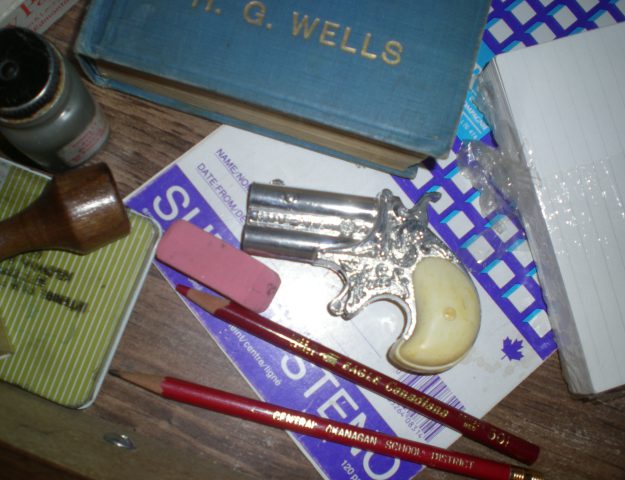