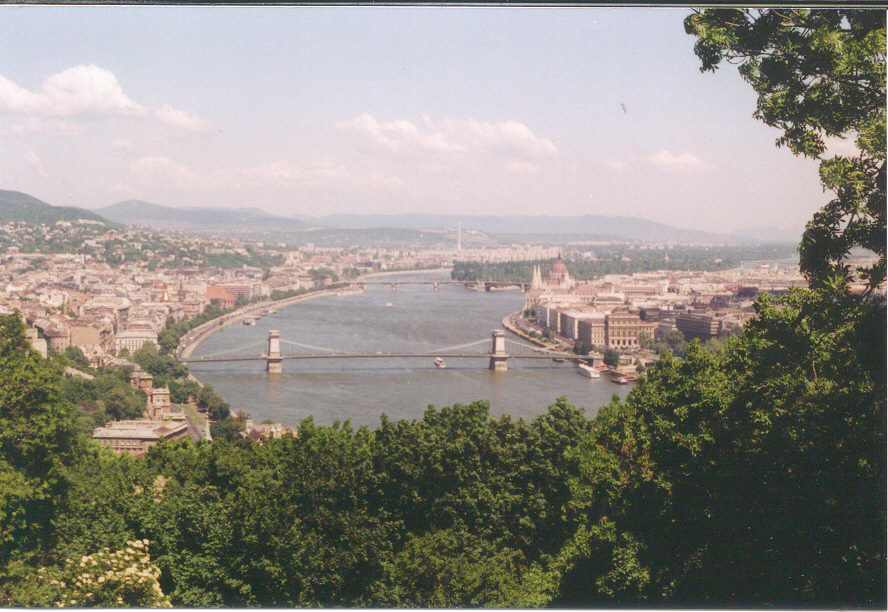 Following the M-1 freeway in our rented Opel Vectra station wagon, the four of us breezed in to Budapest, a busy city of 2 million people. Travel brochures refer to this city as the Paris of the East.

Executing the “Latino style driving technique”, as outlined in the Budapest Visitor’s Guide “Need to Know” section, “driving in Budapest should never be tackled lightly and certainly not by the fainthearted. There is a Highway Code, though few seem to give it much regard. Armed with that information we looked for the small blue signs with a white “i”(symbol for tourist information center). We wound our way over the Danube River that divides the flat “Pest” (pronounced pesht) side from the hilly “Buda” area of the city. Buda and Pest were officially amalgamated to form Budapest in 1872.

The last sign pointed to a typical house in a quiet residential neighbourhood.
After waiting inside with a crowd of tourists, we were shortly served by a portly gentleman who greeted us in fluent German. He showed us what accommodations were available and we chose a small two-bedroom apartment in the heart of the city. For an additional 19.90 Euros each we purchased the recommended two-hour city tour. Although the Forint ($.007 CDN) is Hungary’s official currency, many tourist related businesses like restaurants, hotels, shops, etc. will accept the Euro ($1.60 CDN).

Our drab gray apartment building was located on a narrow one-lane street with cars parked on both sides. There was no elevator. Our dark and dingy third floor flat was astonishingly quiet, had very high ceilings and overlooked an inner open courtyard. The two bedrooms had plenty of beds, more than we needed, and the kitchen included a separate eating area. The small bathroom was had a bath and shower and was adequate for our needs.

The next priority was to find a secure parking lot to keep our car off the street for two nights. We had been forewarned that car thefts are a common occurrence here. After checking out several of the official high-walled parking lots, designated with a white “P”, we found one near our apartment and paid the owner for two nights (1500 Forints or around $7.50 Canadian per day). As is the norm with many individually owned or small businesses in Budapest, cash is only accepted.

That evening we explored the restaurant area near the opera house and stumbled upon “Svejk Restaurant and Grill at 1072 Kiraly Ut 59/b”. The waitress who greeted us as we entered said, “you can eat as much as you like and as often as you like.” This was my kind of place! We gorged ourselves on a delightful smorgasbord dinner consisting of grilled meats, seafood, vegetable dishes, pasta, a variety of cakes for dessert, even all beverages were included. My kind of eating establishment!

The next day was warm and gorgeous. Stopping at the Unio Hotel, several doors down the street from our apartment, we ordered a buffet breakfast of scrambled eggs, cold cuts, yogurt, orange juice and awful muddy tasting coffee.

At 10:00 a.m. we crammed into a cab, included in the city tour, and our taxi driver whisked us through the crowded alleys to our tour bus waiting for us on Andrassy Ut. This main street is Budapest’s answer to the Parisian grand boulevard. Along its’ route are impressive consulate buildings and elegant houses of Budapest’s well-to-do.

Budapest is a city filled with statues commemorating many famous Hungarians from Emperor Franz Josef, who was crowned King of Hungary in 1867, to Hungarian composer Franz Liszt, as well as other notable Hungarian artists, architects and political figures. Statues seem to crop up everywhere, from giant plazas and hilltops to tucked-in hidden out of the way nooks and crannies, wherever there was enough room to stick one.

Heroes’ square at the end of Andrassy Ut, is one of the most famous landmarks in the city. This large granite tiled plaza which is dominated by the 36 metre (118 foot) column called the Millenary Monument, was built to celebrate Hungary’s millennium in 1896, although the project wasn’t finished until 1929. Scholars arbitrarily picked 896 as the year Arpad led the victorious Magyar hoards into the Carpathian Basin. The statues that make up the monument were renovated in time for the 2001 celebration of Szt Istvan’s Day, a national holiday in Hungary and mark the founding of the State. Two colonnades feature various Hungarian rulers and princes and are topped with sculptures representing Work, War, Peace and Knowledge. At the center are Arpad and the six other leading Magyar chieftains, grouped around the base of the column. On top of the column is Gabriel, holding an apostolic cross and the Hungarian Crown, signifying the archangel, supposedly appearing to Istvan in a dream, urging him to convert the pagan Hungarians to Christianity. Flanking this square are two of Budapest’s leading museums, the Museum of Fine Arts and the Palace of Arts.

Budapest boasts over 40 museums and galleries, from agriculture, beer, and military history museums to postal and telecommunications, bank notes, flags and saddle Museums. There is even a house of terror museum, for those with a taste for the macabre.

Climbing the steep Palota Ut, in the Castle Hill District, after crossing Erzsebet hid (Elizabeth Bridge) to the Buda side, we passed Fishermen’s Bastion, named because it was the section of the medieval castle walls assigned to the Fishermen’s Guild for Defense. Although it looks ancient, it was actually designed by Frigyes Schulek and built in the early 1900s.

The bus stopped in front of the imposing Citadel, built by the Austrians in 1851 as a public symbol of their authority over the Hungarians following the suppression of the 1848-49 Revolution and War of Independence. The 14 metre Liberation Monument, depicting a woman holding a palm leaf of victory above her head as a symbol of “liberation” from the Germans by Soviet troops in 1945, stands in front.

We got off the bus and snapped some photographs of the awesome vista overlooking Budapest, the Danube River, and its’ many bridges.

Meanwhile, I tried to negotiate a good price on a handmade magnetic chess set, from one of the local vendors there, but before the lady and I could arrive on a mutual price, it was time to get back on the bus and continue the tour.

Adjacent to the Citadel is pastoral Jubileumi Park, one of several large greenbelt areas in this city. The driver skillfully maneuvered the bus around the narrow steep sharp curves, braking often for cars as we proceeded back down Gellert Hill. This hill and monument on the eastern side of the hill are named after the Benedictine Abbot Gellert who was employed by St. Stephen. As legend has it, he was thrown to his death from this hill in a barrel of nails during a pagan revolt in 1046.

We drove through the Castle Tunnel, the brainchild of Count Istvan Szechenyi, recognized by his countrymen as being the Greatest Hungarian. After rounding a traffic circle, our bus passed the famous Chain Bridge, also first envisioned by Count Istvan Szechenyi. Designed by Englishman William Tierney Clark and engineered by Scot, Adam Clark, the Chain Bridge was originally built between 1838 and 1849.

Margit (Margaret) Island Bridge jogs at an angle in the center at Margit Island. This 2.5 kilometer long and 500 meter wide green space in the middle of the Danube River is banned to vehicular traffic. The island serves as a recreational area for cyclists and joggers and has a stadium, sports field, Olympic size swimming pool, an adventure park, and even a Franciscan church. We just didn’t have time to explore the sights on this island.

The tour ended after driving through the grounds of the impressive Parliament building. Imre Steindl’s design won the public competition to build a home for Hungary’s Parliament. Work began on this massive structure in 1884 and was finally completed in 1902, and as expected, well over budget.

We checked out St. Stephen Basilica, named after Hungary’s first Catholic King, saint and founder of the state. Work began in 1851, and with the original 96-metre dome collapsing in 1868. The cathedral was finally consecrated in 1905. The famous Chapel of the Holy Right Hand is said to house the shriveled remains of the king-saint’s hand.

Walking around the flat “Pest” area is relatively easy with a good pair of walking shoes and Andrassy Ut is particularly pedestrian friendly. At Heroes’ Square, in front of the Palace of Arts, an Australian student was selling tickets to a 3-D video presentation about Hungary. The informative 25-minute presentation was well worth seeing and features various historical sights in Hungary, particularly the mineral springs, spas and caves that this country is known for.

That evening, we dined in the regal elegance of the Rococo style Danu Theater Restaurant. A small stringed musical ensemble, accompanied by a pianist, performed Viennese waltzes and other classical pieces of music for the patrons. The atmosphere set the mood for the evening’s vivacious performance of the 30 member Danube Ensemble and 5 member folk orchestra, presenting authentic Hungarian choreography and music. The folk dancers exhibited amazing stamina and frenetic energy, as they high kicked, boot slapped, twirled, clapped and whistled in their native dress.

Afterwards, and still needing to walk off our big meal, we strolled over the Chain Bridge, lit up in golden yellow. The crescent moon hung above it, with the citadel museum, also bathed in a yellow glow, as a backdrop.

Walking along the tram tracks adjacent to the Danube River, the amber lit Parliament Building shone like a beacon on the Pest side. We stopped for some cool refreshments at a Belgium pub. This popular nightspot was a meeting place for the mostly younger crowd. Couples were engaged in lively conversation, enjoying a nightcap after an evening out on the town.

It was midnight when we unlocked the iron-gate in front of our building and climbed the wide stone staircase to our suite. Exhausted, but content with the day’s accomplishments, we realized we didn’t allocate enough time to see everything in this beautiful and diverse city. Maybe, one day there will be another opportunity to return… to the city of statues.

For more information about Hungary you can e-mail: hungary@tourinform.hu
If you want to know more about Budapest, take a virtual city guide tour, check the program calendar, book your hotel online, check the city photo album, etc., visit the official site of Budapest at www.budapestinfo.hu 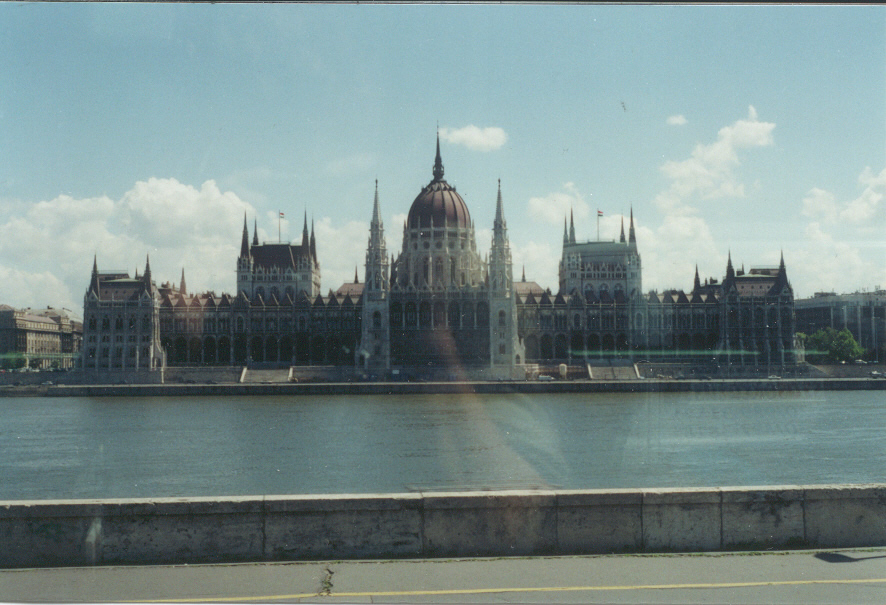 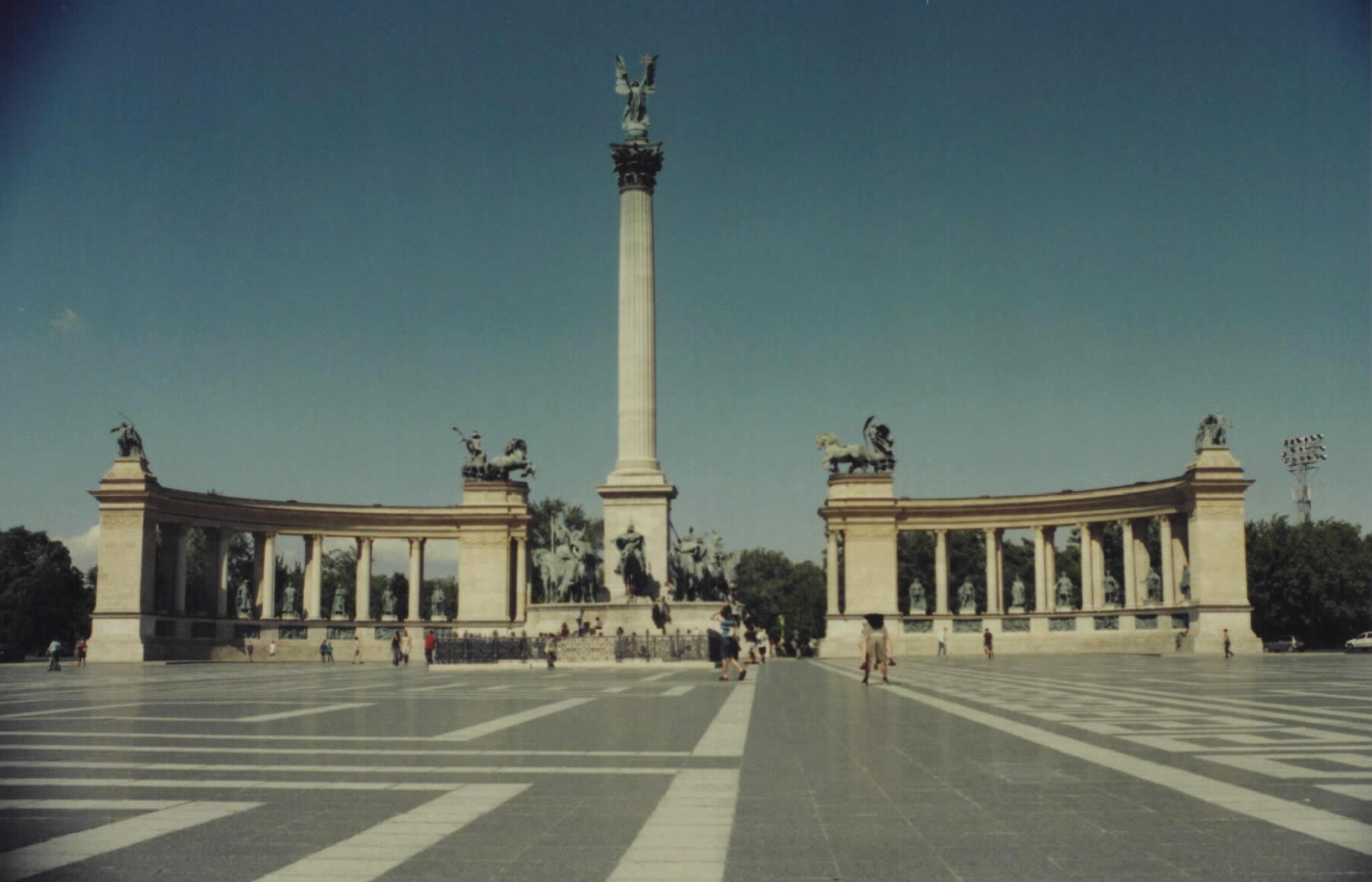 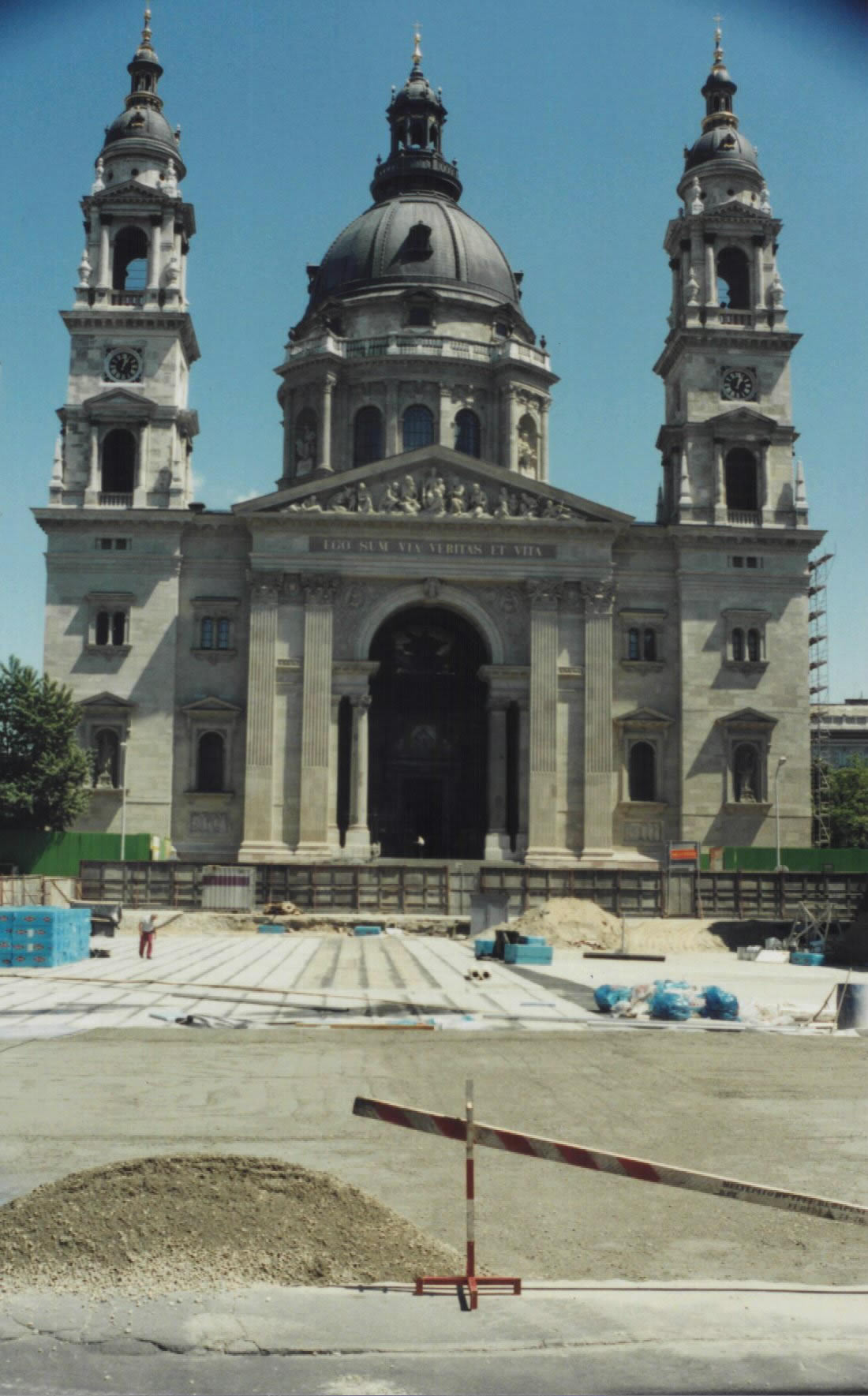