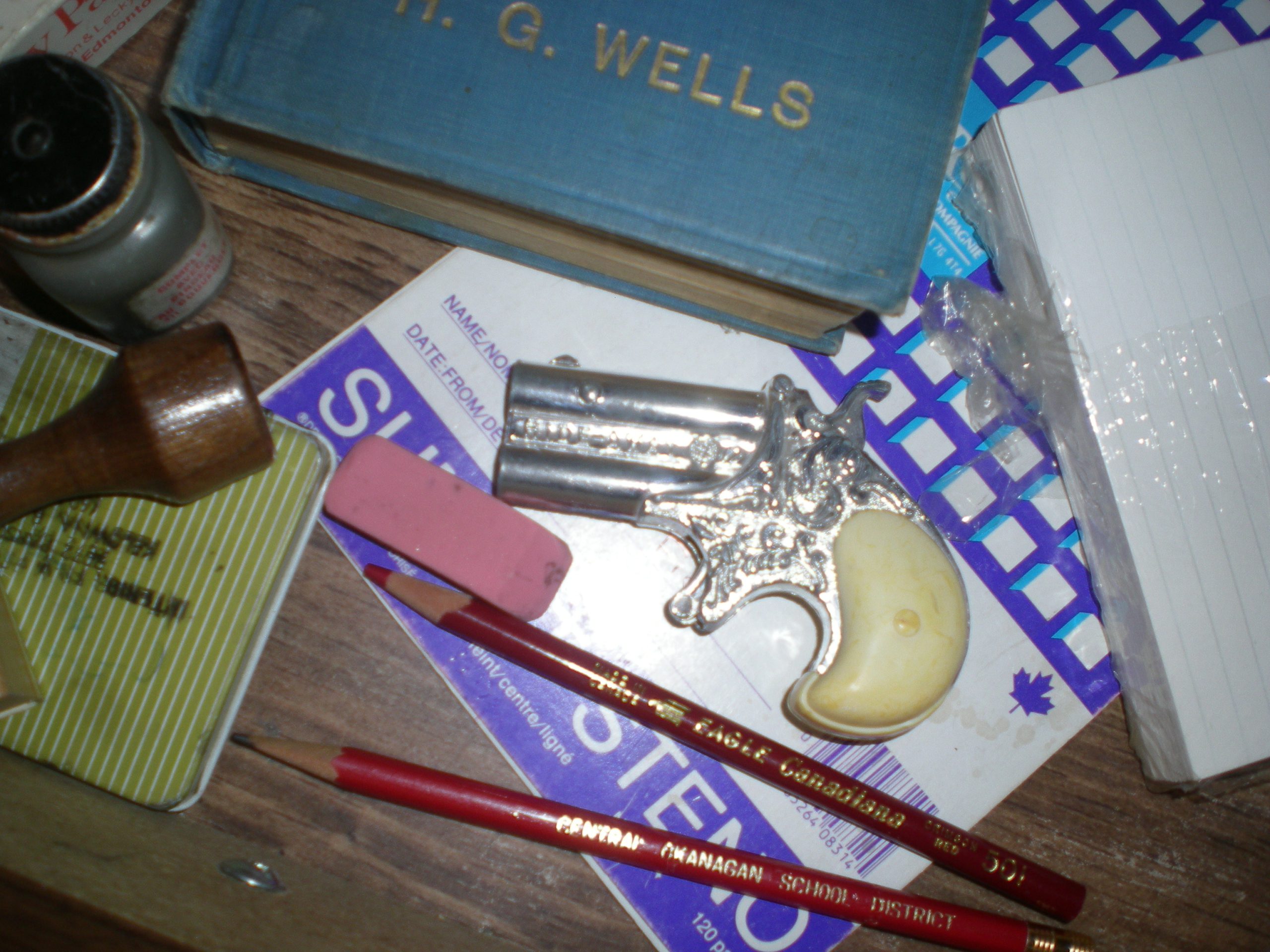 There are many memories I have that flood my brain from time to time, but none as poignant as the one I experienced in my Grade 3 class in 1961. That day forever defined how I viewed and respected other people’s property.

That day began as any other elementary school day with Mrs. Beet, our teacher conducting our class. When the bell rang for lunch, our books were put away in our desks and the students retrieved our lunches from the cloakroom. After eating lunch, most of the pupils left the classroom to go outside to play. Our teacher had left to join the other teachers in the staff room for lunch. As there were only a few kids left in our classroom, this opened up an opportunity that I could not pass up.

Earlier that morning, Wilfred, one of the students had been playing with a toy derringer pistol and wasn’t paying attention to Mrs. Beet. In response, she asked him to hand her the pistol and she placed it in the center drawer of her desk, indicating that she would return it to him later.

I coveted that derringer and wanted it for myself. No one was left in the classroom as I walked up to the teacher’s desk and opened the center drawer. There was the tiny ornate pistol with the white handle lying in the middle of the drawer. It seemed to call out to me to take it! Who would know? There were no witnesses! It was ripe for the taking!

I quickly grabbed the derringer, put it in my pocket, closed the drawer and went outside to join the other kids, reassuring myself that as I hadn’t been detected by anyone seeing me in the classroom during the lunch hour, I could rest assured that I wouldn’t be suspect!

The bell sounded to come back in to class and the students took their seats. Uh oh! Mrs. Beet stood before the class with a solemn demeanour. To add drama there was a moment of silence before she spoke. A wave of panic came over me even before she uttered her first words. I already knew.

“Wilfred’s derringer is missing from my desk.” She slowly articulated. “Would the student that took it come up and give it to me?” A deafening, paralyzing silence from everyone in the class was her response. You could hear a pin drop. I could feel the flushing heat migrating to my cheeks, and a more intense state of panic set in. My mind began to race. What would be her next move? Would she accept that if no one admitted to taking the toy cap pistol, she would back down and perhaps assume that someone from outside of our class has absconded with the derringer? Would Mrs. Beet continue with teaching the class…or would she doggedly pursue her current path of investigation and try to find the culprit?

The teacher paused for a moment and then stated. “Would everyone take everything out of your desks and put them on your seats, and I will check your desks! Now, real fear overcame me! I had to react very quickly as I had stored the derringer in my desk! Where was I going to put it to escape detection? I stealthily slipped the cap gun from my desk and slid it into my pocket while everyone’s eyes were focused on Mrs. Beet. Thankfully, no one noticed, otherwise one of the students would have squealed to the teacher. To further conceal the derringer, I slowly grabbed foolscap pages from my desk as I was emptying the contents, and quickly crumpling and stuffing them into both of my front pants pockets. The teacher hadn’t noticed as she was checking the first desks on the other side of the classroom, and to my knowledge, none of the students had noticed my cover up…or did they and didn’t speak up?

After inspecting all the desks, and obviously not finding the derringer, Mrs. Beet stood at the front of the class once again and announced. “I am going to search everyone’s pockets! I was dumbfounded by this teacher’s single- minded goal, determined to find the derringer and the culprit behind the theft. For me, I had no options left to dispose of the cap gun. For a brief moment I thought about walking to the cloakroom to deposit the derringer into my lunchbox, but that would immediately expose my guilt. No, I ascertained, my best option would be to keep silent and hope that Mrs. Beet would not dig deep enough into my pockets, past the crumpled paper, to find the gun.

Droplets of sweat started to form on my forehead as the teacher commenced searching the pockets of her pupils. Starting from the far front row, one by one she felt through everyone’s pockets. It was an easier and quicker process inspecting the girls, as they wore dresses or skirts that either had no pockets or small empty pockets. The nearer Mrs. Beet came to my desk, the more I became anxious and apprehensive. I was determined to remain calm, be composed and not say a word.

Then finally, the dreaded moment arrived, when she towered above me at my desk. This would be the moment of truth! Would Mrs. Beet find the derringer, or would she not make the effort to dig deeper into my pockets, and fail in her quest to find the stolen derringer?

I stood straight as her hand delved into my right pocket, past the crumpled papers that I thought would inhibit her search. Then, as fear gripped me, she grasped the object at the bottom of my pocket and pulled it out…to reveal to the class that it was indeed, the stolen derringer! All eyes were on me. There eyes cut through me, accusing and judging me! I had no defense for my action, and nowhere to hide, because the truth was now known to the whole grade 3 class…that I was an unrepentant, unashamed thief!

Mrs. Beet directed the class to put their books, papers and other school supplies back in our desks and gave Wilfred back his derringer. It was back to normal as she resumed teaching the class, as if nothing had happened. But something had happened that day! I learned a valuable lifelong lesson, not to take anything that didn’t belong to me, and that your sin will find you out!

Did our teacher Mrs. Beet feel violated when she discovered that someone had stolen something from her desk, and reached her tipping point, determined to find the thief? I will never know. Her tenacious goal to find the culprit paid off. Firstly, I was caught, exposing me for what I was…a thief, and teaching me a valuable lifelong lesson…not to ever take anything that didn’t belong to me. Secondly, this incident taught the whole class a lesson…you will be found out if you steal something!

When I got home from school that day, my mother took me aside and told me that Mrs. Beet had phoned and told her of my theft. She reassured her that these things do happen, but not to be concerned, as she was certain that I learned my lesson and that I probably wouldn’t steal again. She was right!

Mom ended her talk with me by reassuring me. “I am not going to tell dad about this.” I couldn’t expound on how relieved I was hearing those words!

The irony about this incident manifested itself four years later, when I acquired a similar derringer through a trade. I put that cap gun in a small toy

safe that my brother and I installed inside the wood-framed base of a chimney in the old abandoned Webber house our family owned, that us kids used as a fort. When our family sold the property in 1967, I never even bothered to retrieve the derringer or the safe before the next owners moved in!