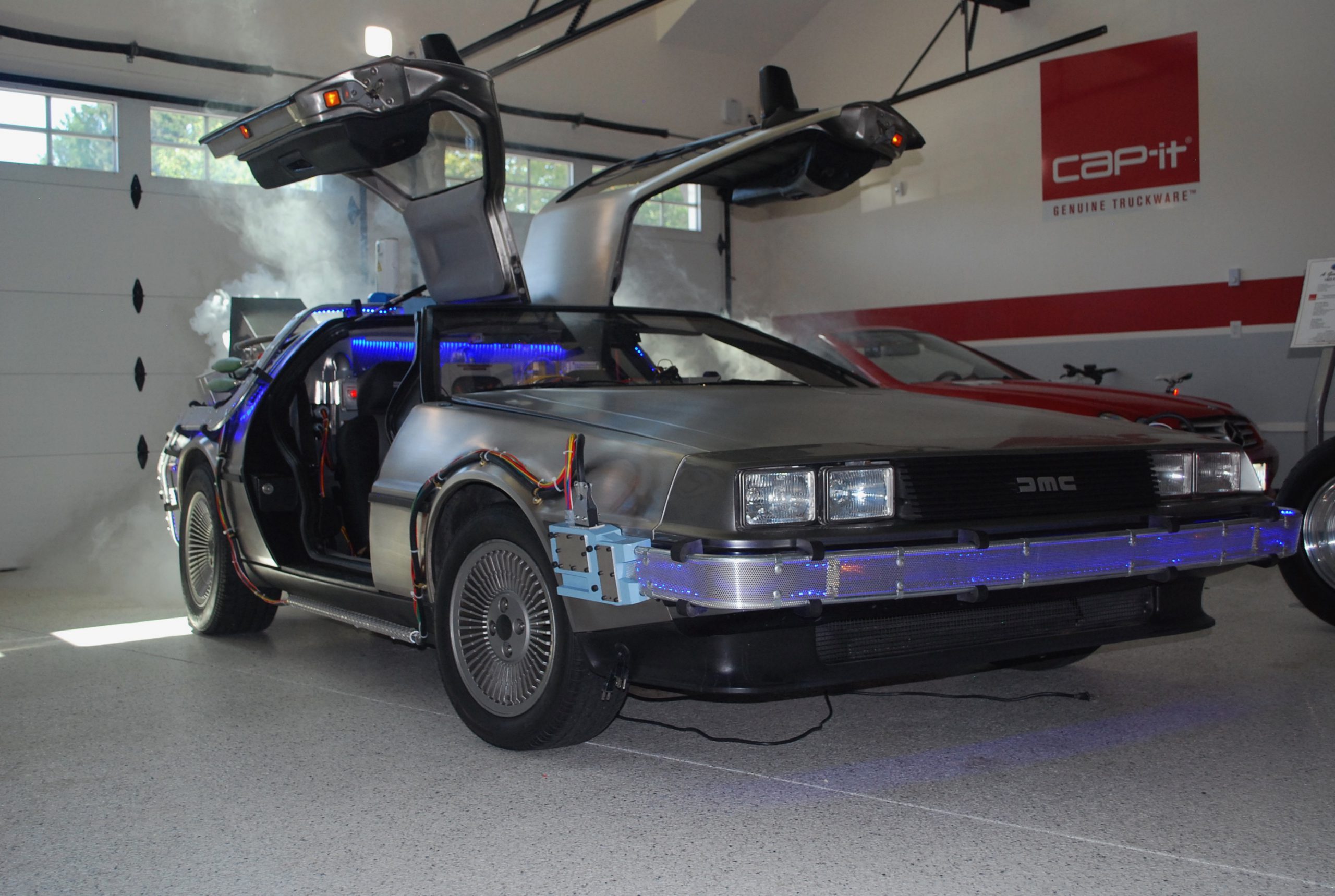 The typical movie photograph of the ‘Back to the Future’ DeLorean that movie goers will instantly associate with the movie trilogy.

Initially, Back to the Future scriptwriters Bob Gale and Robert Zemeckis, also film director, had planned to use a rounded style 1950s refrigerator as a time machine. This cumbersome fridge with the occupant had to be loaded onto the bed of a pickup truck and transported to an atomic bomb testing site each time they were transported back or forward in time.

Four drafts of this movie were written and were rejected by every major film studio over the next four years. Finally, Steven Spielberg agreed to join the project as a producer. The final draft of Back to the Future was accepted at Universal Pictures and scheduled for filming in 1985.

After the script was approved for production, the refrigerator mode of time travel idea was deemed to be too awkward, cumbersome and time consuming. More importantly, it was feared that kids, after seeing the movie would get the dangerous and potentially life-threatening idea and become trapped inside refrigerators. It was Zemeckis who suggested to Bob Gale that they use the DMC Delorean for their time travel vehicle. The car looked like a spaceship with a sleek design and distinctive gull-wing doors. People from the 1955 era that the car traveled to would think it was an alien spacecraft.

Even though the DeLorean Motor Company had declared bankruptcy in 1982. John DeLorean, at the time the 1985 movie was being filmed, was battling in U.S. federal court on a drug trafficking charge as well as other cases involved with the bankruptcy of the company.

However, after the movie release of Back to the Future, the look of the car became so popular that car companies began making special body kits for DeLorean owners, so that they could replicate the look of the time machine.

The lead DeLorean, one of three that were fabricated for the first film in 1985, was restored in 2010 to its onscreen condition and was put on display at Universal Studios in Hollywood. Later this ‘Hero Car’ or ‘A Car’ was installed in a clear plastic display case and displayed in Universal’s theme park. The ‘B Car’ that was used mostly for the driving scenes, fitted with flame splitters near the wheels of the DeLorean was destroyed during the filming of Back to the Future part III. The ‘C Car’ is not a complete car, and was used for filming the car interior scenes. Universal Studios still owns it, and it is in storage.

Now it’s time to board the Back to the Future DeLorean, enter the date and time coordinates on the keypad for July 26th, 2020 at 1:45 p.m. and select the start button. The gulling doors close and the red L.E.D. display on the dashboard starts the RSV V-6 engine and the car lurches forward as the numbers on the display increase until it hits 88 m.p.h., the magic number that propels the DeLorean through space and time. We land in a beautiful garage in the Fraser Valley in British Columbia.

The owner of the garage is Hank Funk, a successful businessman and founder of the international truck and camping accessories company Cap-it. Hank is also a renowned western and contemporary painter and graphics artist and his forte is his meticulous attention to detail.

At the beginning of 2019 Funk decided to embark on his latest project…to build an authentic replica of the ‘Back to the Future’ DeLorean. He was fortunate enough to source a totally restored DMC DeLorean in nearby Port Coquitlam, near Vancouver, B.C. The previous owner even replaced the rubber moldings around the doors and the carpeting, making this an exceptional example for Funk to begin his rebuild.

The next step was to acquire all the information he could find to plan how he was going to build this ‘Back to the Future’ DeLorean as close to the original car as humanly possible. “There were no plans or schematics for this car.” Hank revealed, so he traveled to Los Angeles and visited the Petersen Museum, where the ‘B’ car was on display, and asked if he could take photographs of their car. He was allowed to take as many photographs as he needed, but not touch the car! Approximately 450 photographs were taken of every inch, inside and outside of this car, capturing every single detail right down to the nuts and bolts and hardware that were used to build this film car.

Cardboard mockups were built in Hank’s big shop to give a physical perspective of where everything that was on the car needed to be exactly located or installed.

Funk realized very quickly that many of the parts on this car were military aircraft parts, particularly from Apache and Sikorski helicopters. For example, the connecting rods from the Apache and exhaust port from a Sikorski. Similar to playing a treasure hunt game, other parts that needed to be sourced for this project included medical heat sinks, 240 volt plugs (can’t buy them anymore), and had to be handmade), Zero Haliburton cans, battery charger for 3 batteries, flux capacitor for filling up the plutonium chamber (coffee maker), a spectranometer (a shop in Texas had this item), 12 volts D.C. to 115 volts A.C. power inverter, Flux Band junction box, compressor mufflers, T.F.C. Drive handle, rear view mirror that uses a camera, theatre fog machine, MP3 player with remote to play the music from the movie through 4 flat Bose speakers, Dr. Brown’s famous clock (Another shop in Texas had this genuine item), cooling fins and many other items too numerous to mention. The four white-faced gauges on the center of the dashboard had to be made in France.

Funk has all of the tools required in his well-organized shop to build this car including a pipe bender to make precise three dimensional bends in electrical conduit pipe that are attached to the rear outside of the car. Every single part, including the wormhole emitter on top of the car and the mounting hardware, right down to the clips, nuts and bolts are exactly replicated to the original film cars.

Funk spent 1200 hours or 1½ years to build this car. During the Covid-19 months, he worked night and day until the project was completed, a testament to his perseverance and dedication in completing this monumental task.

His ‘Back to the Future’ project was completed in July 2020 and his wife Elaine encouraged him to enter the car in a drive through car show called “PNE –360 Fabrication Inc. Covid Car Show 2020” at the Pacific National Exhibition grounds in July 2020. “I hadn’t planned on entering the car show and didn’t want to go, but Elaine convinced me to enter.” Hank remarked. He was glad that he did though, because his ‘Back to the Future’ DeLorean won the first prize trophy in the ‘Best Custom’ category.

In late August Hank entered the DeLorean in the Wings & Wheels Car Show at the Tradex Centre in Abbotsford and won 2nd place in the ‘Best Modified 1980’ category. The fruit of his labour and dedication to impeccable detail on this project is already garnering him well-deserved accolades and recognition for the signature car in his extensive collection.

When asked why he built this famous film car, he replied. “I wanted to entertain the kids.” Funk will make this DeLorean available in the future by request for special events, private functions, visits to seniors’ homes, etc. This film car, more than any other car that was made famous in movies, is truly a sight and sound sensation that conjures up great memories for all who see and experience it.