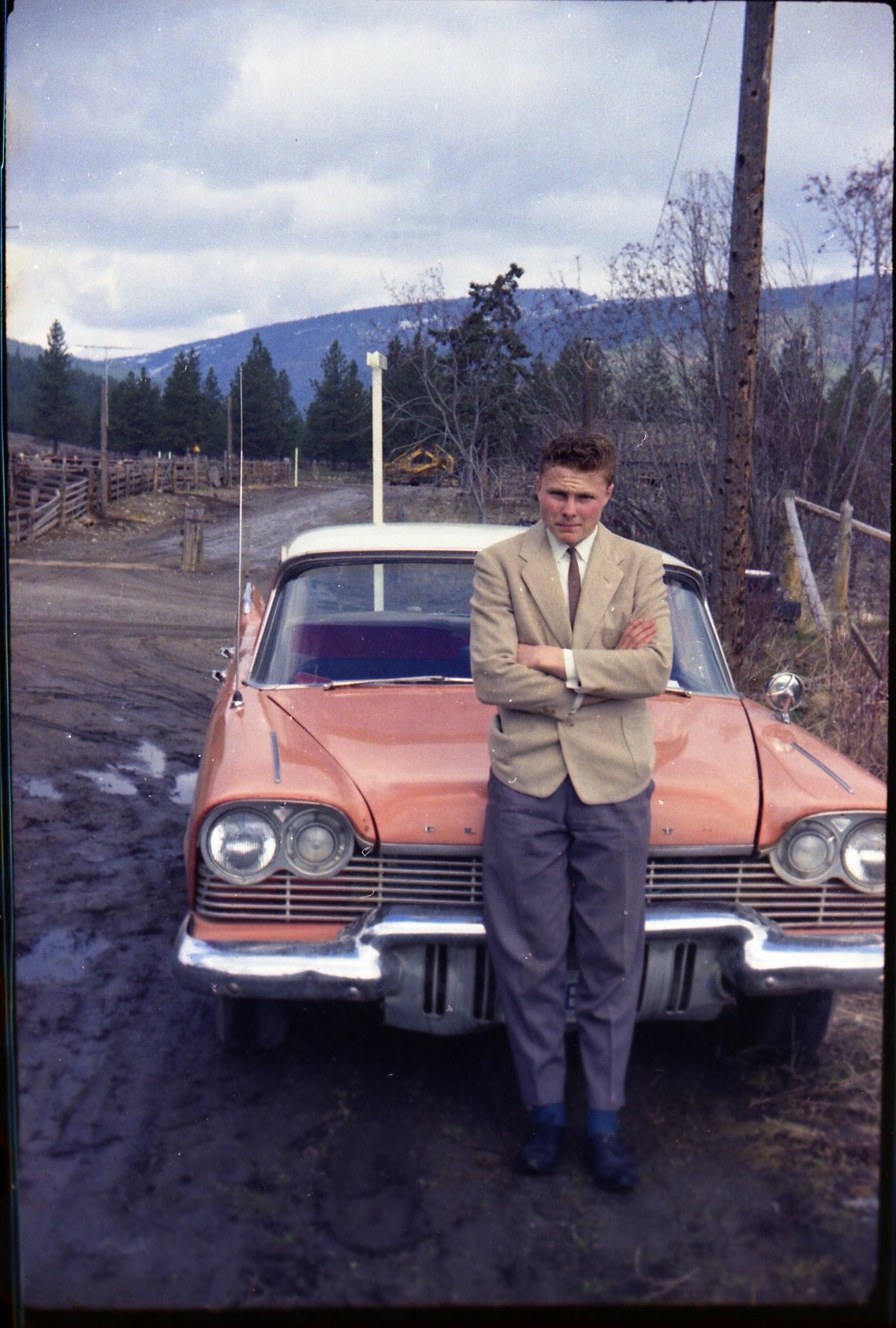 In the late summer or early fall of 1966 our 1957 Volkswagen bug broke down for the last and final time. It was the last straw for my dad and older brother Frank, as the car was not worthy of spending the time or the money to repair it for the umpteenth time. The VW had provided our family with yeoman service and it was pushed out of our schoolhouse (converted to our garage and mechanical workshop) and wheeled around back of the building, where it sat for a number of years. Because the Volkswagen had served as our only mode of daily transportation, it was imperative that we purchase a replacement vehicle on that day my parents had set aside for our family to go car shopping. It was obvious that our 1949 forest green 3-ton Fargo farm truck would be far too impractical to use as a daily driver.So on the first Saturday after the VW packed it in, my dad, mom, younger brother, sister, and I piled into the neighbour, Katie Learn’s dark magenta early 1960s Vauxhall and headed to the car dealerships in Kelowna. As kids, we were quite excited about getting another car. We knew that we would be getting a used car as our family didn’t have a lot of money.

In the 1960s the car dealerships were located down town, not like today, in a specially designated auto mall area. As dad had previously purchased our 1940 Buick from Victory Motors, the GM dealership, that is where we started our used car search. I remember they had a 1957 Mercury four-door hardtop that looked cool, but it had an oil leak between the engine and transmission and required a new seal. That car was out of the question and my dad was not a Ford man anyways. We looked at a pink 1960 Studebaker Lark station wagon and the saleman started the flathead six-cylinder engine and dad listened to the engine running. He decided not to take the car out for a spin. I got the impression that dad did not have too much faith in Studebaker products and he was not familiar with the mechanics of these cars.

We trundled over on foot to Sieg Motors, the Rambler dealership just next to the Victory Motors lot, but they didn’t have any used cars in his price range. A block west was Kelowna Motors, the Ford dealership. As it was a short distance away, dad suggested that our family walk there. As we strode into their showroom I noted a copper brown 1966 Meteor 2 door hardtop with a cream vinyl roof, on display. Dad spoke to the salesman but he said that were no cars in their stock that would interest him, so we left to drive north to Lipsett Motors, the Chrysler dealership.

The middle-aged salesman was friendly and helpful. He showed us a white 1954 Chevrolet Bel-Air four-door sedan. Dad took the car out for a spin, with mom and us kids in the back seat. The car rode well and it was in great shape for being 12 years old. However, noting my father’s pensive silence, I got the distinct impression, perhaps the fact that the car was older than our Volkswagen and being somewhat biased, that he was reluctant to buy a Chevrolet.

It was getting late and I know that my dad was anxious to buy a car that day. He asked if there were any other used cars on his lot. The salesman mentioned matter-of-factly that there was a Plymouth sitting in thier body shop that had just been painted. My father perked up. He had owned a 1937 Plymouth when he and his family arrived in the Okanagan and it was a good car. He was impressed with Chrysler products, particularly Plymouths. “Can I see the car?” My dad asked. The salesman was accommodating and drove the car out of the paint shop. It was a 1957 bottom of the line Plaza 4-door sedan with the body painted in an unusual fuchia/peach colour with a white roof. We went for a ride in the car with dad driving. I remember the salesman beside him being in a good mood and when the car bounced over the railway tracks at the north end of Kelowna, he remarked. “Did you see how the car took those tracks? Just like a Cadillac!” My dad was silent as he continued to test the car. We returned to the dealership and my dad spoke with my mother and the next thing we knew, we were driving our latest automotive acquisition home. This car was vastly different from our cramped 1957 Volkswagen. We kids had lots of room in the back seat. Dad and mom commented on the huge windshield for better visibility and there was more power with the flat head 251 cubic inch six-cylinder engine under the hood. The transmission was a standard three-speed column shift with no synchromesh in first gear. This car served our family relatively well for four years, however there were a few unseen problems with the Plymouth.

I remember encountering a freshly painted (dark green) Plymouth side valve engine sitting on the floor of our old school house/garage one day, that I suspect was a newly rebuilt engine for our car. My brother Frank and dad no doubt installed it in the Plymouth.

Then there was the Sunday morning when, late as usual, my dad drove my brother, sister and me to church to attend Sunday school. We were literally flying down the dirt road and plunged through the numerous deep potholes in front of our neighbour’s property down the road from us. There was a loud bang from the front end of the car and I noticed that my dad was struggling to turn the steering wheel, but it was stuck. The car careened forward down the slight hill and came to a halt in the middle of the road. Thankfully, we encountered no other vehicle coming up the road. Once we exited the car we immediately saw the problem. The left front wheel had folded under the car. As there was little traffic on this road, we walked home and my dad got the Minneapolis Moline tractor with the farmhand and chained up the front end, lifted it up and towed the car home. Later my dad explained to me what had happened. The lower ball joint assembly had fractured, probably over time, and when the car hit those potholes it caused the ball joint assembly to break, resulting in the ball joint to pop out which caused the wheel to fold under the car.

Another time, my father was chasing cows in the large hayfield using the Plymouth as a roundup vehicle. The left wheel hit a gopher hole and a loud bang erupted and the left side of the front end instantly dropped down dramatically, with the inner fender almost touching the tire. It was another learning experience for my dad, who was formerly a mechanic, but was unfamiliar with a torsion bar failure. After both torsion bars were replaced, something he could not do for himself, he was very careful when he made future forays into the hay fields.

I remember the first time my dad allowed me to drive the Plymouth. He was taking the tractor and a rake or mower home and I drove the car. I was impressed with how easy the car was to steer with no power steering and the column shift (my first experience with this type of transmission linkage) was quite smooth and effortless. This was the first time I had driven a large car and found the ride to be like floating on a cloud. That indelible impression stuck with me and for many years after that I was attracted to, and purchased either mid size or large cars.

In the spring of 1970 my dad and mom made the decision to buy another Plymouth, this time a 1968 Custom Suburban station wagon. Some relatives were coming for a visit from Germany and dad needed a newer car that was capable of towing a tent trailer. They would be taking the visitors travelling to see the Rocky Mountains, Lake Louise and other parts of B.C. I was in grade 12 at the time and the ’57 Plymouth, along with a 1968 Suzuki 80 motorcycle, became my modes of transportation.

After graduating from high school, I had several jobs and the Plymouth Plaza was essentially mine. To individualize my ride, I shaped, bent and installed front wheel well moldings, that were essentially countertop trim from the 1950s. I didn’t like the black plastic mats in the car and stitched together shag carpet pieces in various colours, shapes and sizes, like a patchwork quilt, and installed the sections in the back, front and glued indoor/outdoor carpet onto the black metal dash. Maybe the effect I was trying to create wasn’t particularly cool, but it certainly was unique. There wasn’t a car interior that looked like this anywhere! Finally I roller painted the rear cove, under the trunk lid and between the backup lights, a flat black. I applied the same black paint on the top and bottom edges of the horizontal aluminum grill bars. That effect really did make the grill stand out and I thought that was cool!

While I owned that car I experienced a lower ball joint failure on the right front wheel on the same pothole area, but I wasn’t travelling as fast as my dad was driving with the first incident. Why both ball joints were not replaced after that first incident, I will never know. The only other problem I encountered, and on more occasions than I can recall, was running out of gas. Admittedly, there is absolutely no excuse for this kind of irresponsible behaviour. Especially, for the fact that I lived on a farm and that we had a partitioned 300-gallon Tidy Tank, with 100 gallons of regular and the other 200 being farm gas. I could have easily filled my car at home with $10.00 @ 40 cents per gallon, while it was 50 cents a gallon at the pumps in those days. To boot, I would save a lengthy walk home. Many evenings when my folks were driving home after an evening out or coming home from shopping, that they would recognize my car on the side of the road, and collectively sigh. “That’s Gordon’s car. Out of gas again!”

Did I ever learn to fill my gas tank and keep an eye on the fuel gauge? Yes, I will blame it on my misspent youth and hanging on to bad habits. Eventually I did finally learn my lesson and have long ago adopted a full fuel tank policy.

It wasn’t until May 1971 that my dad transferred the car to me for the princely sum of $1.00. A month later I traded my 1957 Plymouth in for another set of wheels. As odd as it may sound, for several days after trading in the Plymouth, I went into a state of mourning, no different than if someone close to me, like a relative or friend, had died. I even felt like I had betrayed that old Plymouth as I conjured up both the good and the bad memories associated with that car. After a few days passed, I not only recovered, but thought it funny how an inanimate object can like a car can cause such intense emotions to well up inside you. 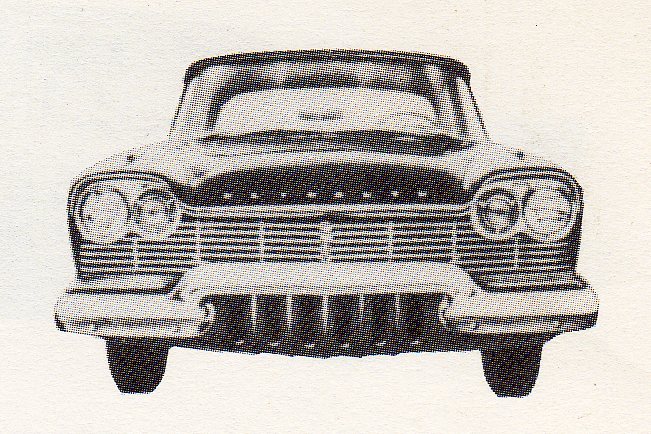